Not a good day all round cup-wise for Pembroke with the Mens 2nds loosing the Railway Cup to Monkstown on a golden goal after tie had finished 3-3 in normal time. It was a touch of revenge for Monkstown who had lost the Mills Cup to Pembroke in similarly dramatic fashion two weekends previous. The Men’s junior team also succumbed in Grange Road loosing 6-0 to Three Rock Rovers in the Walters Cup.

Down in UCD at the Irish Junior Cup final the Ladies 2nds fared no better – Loreto 2nds, current Div 2 champions, proved to be the sharper and more experienced side on Cup Final day. Pembroke started well but Loreto began to assert themselves after 10 minutes and scored the crucial goal 5 minutes into the 2nd half. With Pembroke pressing for the equalizer Loreto broke and bundled the ball over the line with 1 minute to seal a deserved win. 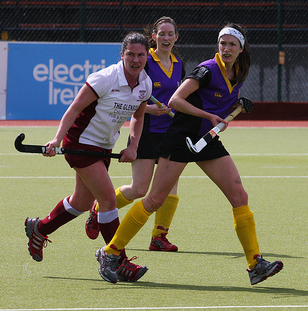 Disappoinment no doubt, but it was an invaluable experience for the majority of the 2nds squad who got their first taste of a senior Cup Final, and no doubt Mick O’Connor’s (mainly!) young side will be back hungrier than ever next season. In particular schoolgirls Joanna McDonald, Sarah Twomey, Rachel O’Brien and Sorcha Clarke all broke through into senior hockey this season, and with their raw genuine talent and the majority of the squad remaining in tact there should be plenty to be optimistic about for next year.

Big thanks to Ava Cooper for mobilising the troops in UCD and all the supporters who cheered the teams on, despite the horrific weather. Special mention to versatile club-member Darina Errity who enjoyed a maiden sumo win over her Loreto competitor who we are told was on an 11 match winning streak. We never knew you had it in you Darina 🙂