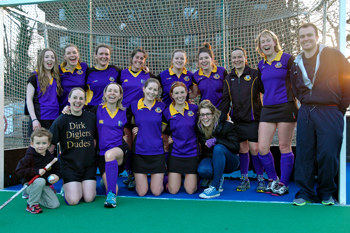 The two previous encounters between Pembroke 5ths and UCD 4ths had resulted in 1-1 and 2-2 draws. The cup semi-final promised to be EPIC! Pembroke arrived early to practice short corners and flicks before the opposition arrived.

Unfortunately, Pembroke were at a loss to one very talented centre mid – Yvonne Bell, due to injury sustained in the league match against Our Lady’s the day previous (which Pembroke won 6-0). Despite this, she was present on the bench encouraging everyone on the team while sporting her fabulous new bruises and stitches.

The atmosphere was buzzing with many supporters gathering on the balcony and sideline anticipating kick off just before 4 o’ clock. The first half was tense, with both teams putting up a good fight, however, it wasn’t long until Rebecca Good crushed through UCD’s defence taking a cracking shot on goal to make the score 1-0.

As this team has learnt time and time again, 1-0 is not a score to be comfortable at, so Pembroke fought profusely for more goals. The half time whistle went and the score remained at 1-0. There wasn’t a happy face to be seen in the dugout at half time. We have been 1 up on UCD before and they have come back fighting, we were a long way to a win yet.

With motivational and positive words from all, the team paced eagerly back onto the pitch ready for a tough second half. Pembroke started the second half strong with Rebecca adding a second goal to her list. The team continued to battle against UCD’s ever weakening defence and with this came a lovely deflected goal from Kate Duffy. UCD kept fighting but it wasn’t enough to stop Roisin Corcoran turning the score into 4-0.

The final whistle blew and confirmed that it would be Pembroke versus Muckross 3rds in the Cup Final on the 7th of April.

Huge thank you to the phenomenal supporters who have been so loyal all season… balcony temperature reported at -2 during the match… that’s dedicated supporters… see you for our Final!!!! BRING IT ON!!
[nggallery id=38]
Maria O’Connor & Jude with photos