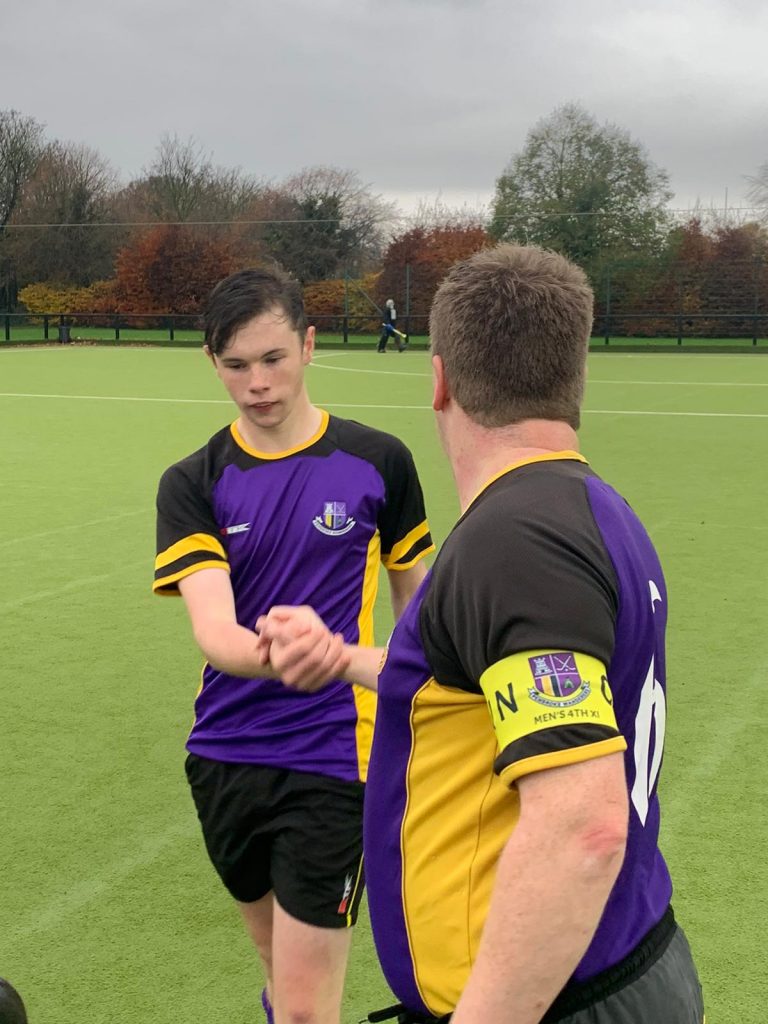 A tense LHA Intermediate Cup win for the M4s via extra-time shuttles proved the only cause for smiles over a difficult weekend of hockey for Pembroke men.

Saturday tipped off with hope when the men’s 4s held Weston 2XI to a 1-1 draw in regulation, thanks to an Adam Goggin goal, before edging the match 3-2 on 1v1s with James Comerford and Thomas Musgrave the shootout heroes. A home quarter final versus YMCA now beckons in January.

M6s waltzed into their league match with Avoca 4s fielding an unusual team featuring an array of former senior clubmen. The quality shone through as a brace from Alan Giles (!), and singles from Dave Loughrey, Mickey Haayen, and Neel Bhandari completed a 5-0 shutout to keep Saturday’s win count healthy.

M1s were unable to keep the momentum going as they slipped 4-2 in their home EYHL tie against second-from-bottom side Banbridge, finding no answers to the pace and guile of current internationals Eugene Magee and Johnny McKee . A rare (in this season) double from Greg Chambers, the second coming a few seconds before the final hooter, wasn’t enough to glean some vital points in this difficult campaign. Thankfully an abandoned UCD vs Annadale tie meant bottom position in the EYHL was not going to materialise this weekend but the final EYHL match before the Christmas break – away to Corinthian this weekend – now looks like an Irish cup final for the team. We wish the boys all the best in the hunt for 3 priceless points to take into the winter window.

With the M2s off the action switched to Sunday with Railway, Intermediate, and Minor Cup games for the M3s, M5s, and M6s repsectively – all in Three Rock Rovers due to pitch contention in Serpentine Avenue.

3s faced higher opposition in the form of Corinthian 2, always a tough game playing the shadow side of an EYHL outfit. Corinthians put up a pair of goals in the first quarter to negate Mick Tijs’s penalty corner opener but the “home” side were unable to keep the boys in red from extended their lead prior to half time. Two more goals from the visitors in the 3rd quarter brought the game to an uncomfortable 5-1 gap before John Lynch clawed one back from a sneaky deflection off a tasty Matt Bentley tomahawk. The scoreline didn’t quite reflect the performance with the Whitechurch outfit a lot more clinical with their penalty corners.

M5s roared into a 2-0 lead in the opening 10 minutes of their Intermediate Cup 2nd round tie versus Kilkenny thanks to a poacher’s double from Michael Bonadrini. Everything looked good as scrappy play from the Cats reduced their numbers to 9 men for a short period in the second quarter but Pembroke were unable to adjust their play and press home their numerical advantage to snuff out the opposition. Good work from Corry Bourke and Hugo Pfeifer was keeping the pressure on but cracks started to appear as half time grew closer, Kilkenny nicking one back to leave the match poised at 2-1. An early equaliser in the 3rd quarter made it all to play for in the final 17.5 min segment and agonisingly the 5s shipped a dramatic Kilkenny winner in the final two minutes to relinquish any tenuous fantasies of cup success this year. Annoyingly, the oppo in the next round would have been Bray 2s, a side holding little fear for Peter McEvoy.

M6s closed the day’s affairs with a return clash against Avoca 4s. Shorn of their Saturday stars they lined out with a more orthodox selection, relying heavily on Devin Donnelly to pull the midfield strings and dictate the pace of the game. Despite facing an Avoca keeper dismissal Pembroke were unable to flood the opposition circle in any meaningful fashion to manufacture precious goal chances. Good approach work elsewhere from Ryan Nolan, Jean Vanderhasselt, Neel Bhandari, and Michael Payne began to yield penalty corner opportunities later in the game but without a pacey injector and a clinical striker the chances fell away until the clock ran out, handing Avoca a 3-0 cup win neither side probably expected.