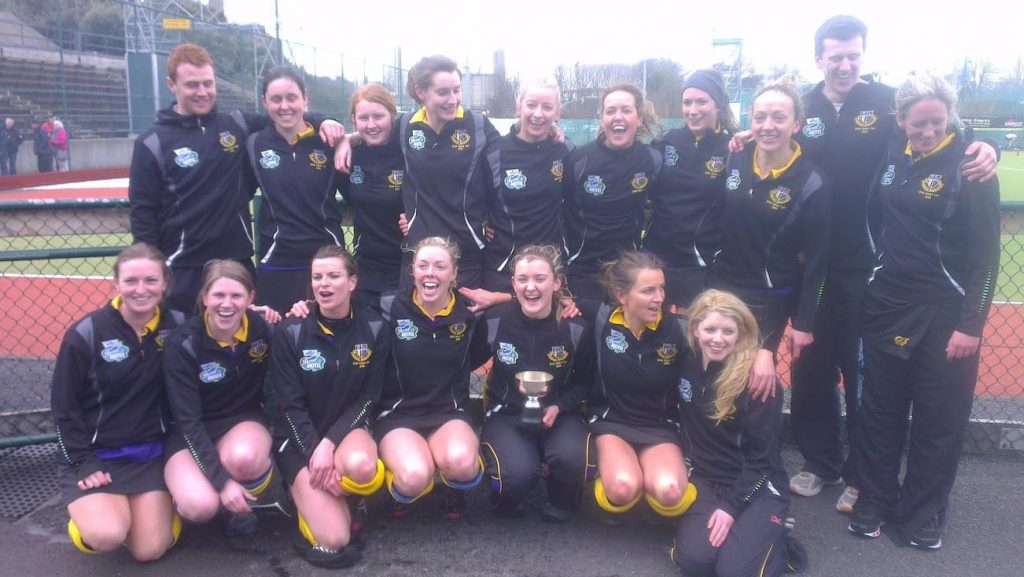 The 2nds lined out in their second Electric Ireland Irish Junior Cup Final in as many years against Lisnagarvey on Sunday.

Their cup run had been almost flawless, scoring 15 and conceding just 1, but Garvey were in impressive form, not having lost a game this season. Though still very cold, the sun was shining, and the purple and yellow faithful were out in force to cheer on the girls. Mick O’Connor, after a 40 minute rousing team talk (which almost matched Flanner’s semi final effort), took the unusual approach of doing just an 8 minute warm-up(!!) and after a hectic few minutes the teams lined out for the start. 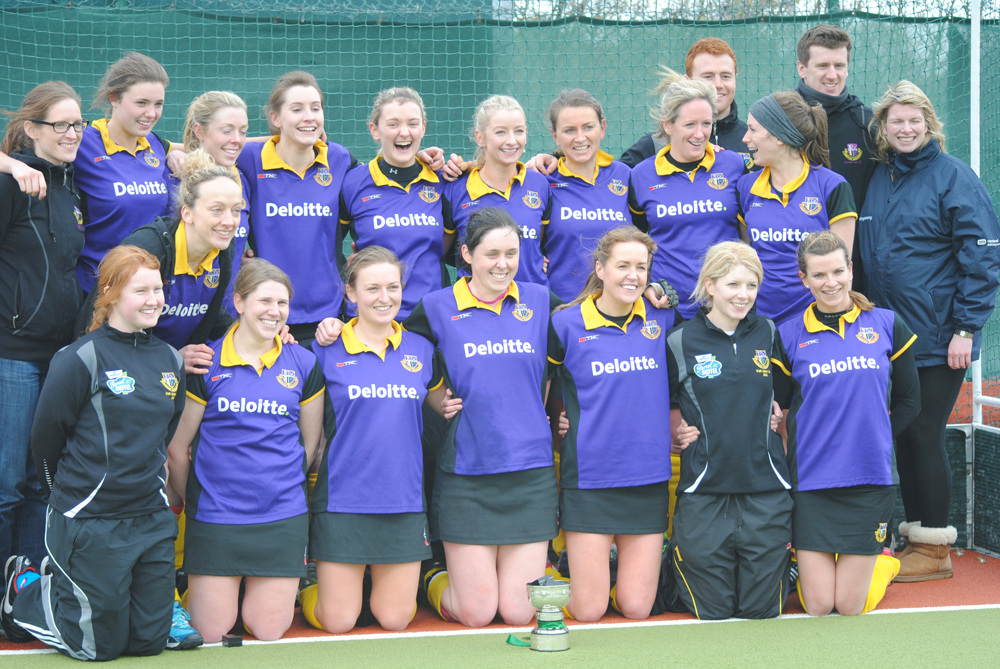 Shona took off on her trademark attacking run from the whistle and caught Garvey by surprise, making it as far as the 25 before winning a free. However, Garvey reacted well and whipped the ball back down into the Pembroke circle to win a corner within the opening minutes. Pembroke cleared, and the shock seemed to settle the nerves as the girls found their form and started to attack the Garvey end.

The Dublin team peppered the Garvey goal with shots, drawing gasps and ‘ooooohs’ from the crowd as ball after ball rolled past open goals, hit the uprights or marginally missed the mark. The Garvey keeper was in top form, and made countless saves to keep her team in it.

Pembroke won a first corner, but it came to nothing, Eimear Mc being caught by surprise when stopper Kats shouted “YOURS” (breaking the golden rule that NOBODY but Kats stops the ball!). The forwards and mids worked tirelessly and ran the Garvey defence ragged, forcing a number of corners and near misses. Sue Ryan came agonisingly close with her famous diving deflection. With 25 minutes gone, Micks ‘London Bus’ analogy was ringing in our ears, as despite having all the chances and all the pressure there was nothing to show for it.

Ciara Howard had a huge hand in changing that around the 30min mark. Picking the ball up in her newly acquired RB position she took off up the line, dinking and dragging the ball past numerous Garvey tackles. Having run almost the length of the pitch she picked out a great pass to Kats Duff who drove along the baseline and put the ball into the P spot. There was a melee in front of goals but Anna O’Neill was ultimately the hero, finally beating the Garvey keeper and putting the Dublin side in front.

Lizzie De Araugo found herself with a close range ‘one on one’ with the keeper minutes later and almost made it 2. Showing beautiful composure, she danced around the keeper only to just miss the open goal! In the process, she tore her calf muscle and had to be helped off by her team mates (while Ronan carefully supervised the situation from a safe distance). Garvey found a renewed energy and attacked with pace down the right. Fiona O’Donovan, spotting the danger, threw her body on the line / on the Garvey player and received a green card for her vigorous tackle almost on the stroke of half time.

In the second half Garvey came out fighting and started to put pressure on the Pembroke defence line. Clara Chamberlayne was superb and didn’t miss a tackle all day. Jane Brownlee never stopped running, and made a crucial tackle in the circle after sprinting from the half way line. Ciara, at right-back, offered a great attacking option with Kats who seemed to have a ball glued to her stick. 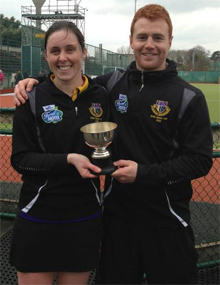 Viv Fenton on the opposite side was a powerhouse and linked up well with the speed of Shona and Holly in front of her. Laura Hanlon disguised pass almost reaped rewards in the circle but the Garvey defence held firm. The northern team were not giving up, and forced a number of corners, with Fiona making an amazing save off the line at one point. All over the field the Pembroke girls were putting in MOTM performances, and the support from the crowd was amazing.

On the sideline, Mick was working on his ‘inner calm’ but with 10 minutes to go he finally cracked and started shouting out random positions at the girls. Garvey continued to battle on, and with just over 2 mins on the clock won another corner. Pembroke defended well, but Garvey got another – it was heart attack stuff! The Pembroke defence, and Lisa in particular, didn’t miss a beat however, and cleared the ball down the right.

Lorraine Horgan collected in the Garvey 25 to shouts of “KEEP BALL”. And keep ball she did, hovering down the in bottom corner with half the Garvey team around her trying to poach the ball. Eventually the crowd started to the count down…TEN…NINE…EIGHT….while Lorraine kept working on holding the ball, all over the pitch the team started jumping with excitement and, after the slowest ten seconds ever, the hooter finally sounded! Game over, and the Irish Junior Cup was coming home to Pembroke!

Just a few quick “Thank You’s”
Massive thanks to everyone who came out to support and make this such a special day for the team and for the club.
To all the players who were part of this squad all season.
To Val Fenton, who found her calling as manager extraordinaire this year and kept things running like clockwork on match day.
To Ronan, who was new to coaching and to ladies hockey, but he took to it like a natural and brought a new dimension to the team.
And last but not least, to Mick, who has been incredible in his 3 year tenure as coach of the Pembroke Wanderers Ladies 2nds.