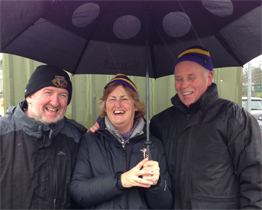 The Ladies 2nds were back on the road last weekend for the IJC semi-finals, but this time they were heading south instead of north, facing Ashton in Cork. With strong Cork representation on the 2’s the girls were looking forward to the trip, and the prospect of getting some local support. And the Moms, Dads, sisters, partners, and friends did not disappoint, braving the horrific weather to cheer on the travelling team.

The Pembroke faithful also came out in force, travelling down from Dublin that morning to cheer on the girls.

The lead up to the game suggested the odds were against Pembroke. Tara Junghenn was knocked out by a hockey ball on Friday in her schools match, and thankfully was ok, but not able to play. Sarah McCready was called into the squad at the last minute, and huge thanks to the all the McCready’s who didn’t think twice about hopping into the car to get her to Cork for the game on Sunday.

Then, on Sunday morning Kats Duff woke in Cork with a severe migraine which ruled her out of proceedings despite her very brave efforts to try and play.

The girls were down to 13 players, and with Mick playing with the Men’s 1sts at the opposite end of the country it fell to Ronan Flannery to rally the girls and get them out on the pitch. In a speech reminiscent of Pacino in Any Given Sunday, Ronan laid it all out for the team, told them what he wanted and sent them out raring to go.

The 2nds took off from the starting whistle, with Shona and Susan combining well and were unlucky not to win a corner in the opening seconds. Pembroke were in control, with Ciara Howard in her new position at RB playing a pivotal attacking role and creating some great opportunities down the right. Viv Fenton was relishing being back on home turf, but the excitement got the better of her and she received a green card 15 mins in for mouthing at the ref. Ashton struggled to find a way through as the midfield pressure was relentless and they resorted to trying to crash through balls to their forwards.

The hard work up front from Pembroke reaped rewards, and the II’s were unlucky not to score from their first corner which hit the post. They rectified that minutes later when Sue Ryan made it 1-0 to Pembroke deflecting a corner through the legs of the keeper. Shortly after that, the 2nds found the net again. Working the ball from end to end in a matter of seconds, Shona (possibly – goalscorer is actually pending video review) was waiting in the circle to finish off and make it 2-0. After that it was just an onslaught of pressure from Pembroke, and, having returned from her ‘side-line break’, Viv produced a wind-up that any camogie player would be proud of to make it 3-0 crashing the ball in the backboard from the top of the circle.

3-0 up at half time and things were looking good, but the team were not content to leave it there. In midfield, Lizzie de Araugo was like a woman possessed and tormented the Ashton back-line – reaching the 30-year milestone just days before had obviously had a profound effect on her. Jane Brownlee took up the central midfield position and distributed the ball right and left all day, opening up the attacking channels. Soon after the re-start Ashton received a yellow card for a dangerous stick trip on Viv. Pembroke used the advantage well, converting pressure into a number of short corners.

Holly Jones finished one of those off beautifully after a pass from Viv to make it 4-0 to Pembroke. Just minutes later Pembroke increased that 5, with Sarah McCready single-handedly creating the goal chance. Playing in right back, she collected the ball in the Pembroke 25 and took off up the line, dodging numerous Ashton sticks before picking out a perfect pass to Holly in the circle who cracked the ball home, leaving the keeper no chance.

Ashton, to their credit, never gave up, and with 15 mins to go forced their first short corner of the game. Lisa O’Rourke, who was having a quiet day in goals, was jolted awake with the Ashton support going ballistic on the side-line. The first corner was cleared but Ashton won another, again well defended with Clara Chamberlayne showing her usual calm and composure under pressure. A third corner was a raised strike which found Eimear’s hand and forced her off with 7 minutes on the clock. The back-line quickly re-set, and the girls took off on the attack again and won three successive corners at the far end. Fiona stepped into the striking position and a cracking shot found the bottom corner to take the 2nds to 6-0 on the final whistle.

Huge thanks to all the well-wishers and especially to those who came out and supported us on the day. Hope to see you all at the Final on April 7th v Lisnagarvey.
[nggallery id=39]