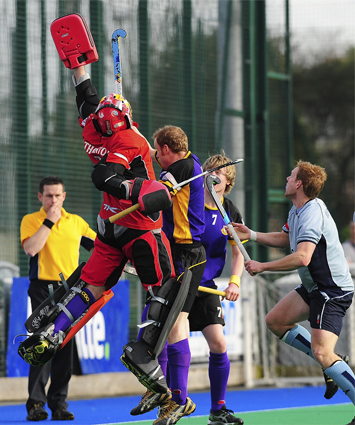 Pembroke and Banbridge qualify from Pool B in a day of high drama in the Irish Hockey League. The Lads finish top of the Pool, with Monkstown being edged out on goal difference. Super results lads and well deserved – IHL Finals weekend will be on the May Bank Holiday weekend!

Official match report from the Irish Hockey League website:
This was a vital match for both teams, Pembroke, current All Ireland Champions, needing to win but a draw being sufficient for Monkstown to progress to the IHL Semi Finals in April.

In the first attack, in the 2nd minute, Maurice Elliott converted a close range opportunity into a goal. Monkstown pressed and for a second stick challenge Michael O’Connor in the 4th minute received a green card and spent two minutes in the “sin bin”. In the 9th minute, using a ploy they repeated several times, in hitting the ball hard into the circle from outside the 22 Monkstown had a penalty corner from a foot infringement by Colin Kelly. This resulted in a fine full length sticksave to his right by Thornton from Ewington.
In the 13th minute another foot resulted in a second penalty corner to Monkstown and this time Ewington put the drag flick under the crossbar and Thornton was comprehensively beaten. Controversy followed in the 18th minute the TO’s Bench tried to operate the “hooter” to end the Quarter at precisely the same time as Maurice Elliot converted his close range effort to make in 2-1 to Pembroke. The Pitch clock, counting down, recorded 17-43mins to play. The Umpire indicated a goal and the players left the pitch. However the goal did not stand due the attempted sounding of the “hooter” and the quarter ended 1-1.

The 2nd Quarter commenced and the game moved from end to without any clear cut chances to either side. In the 29th minute Stephen Cole beat the ‘keeper from the edge of the circle but although a goal was awarded by Umpire Clarke the other Umpire, Colvin Beatty, had spotted the ball had caught the player on the body before shooting. The score remained at 1-1 with a good Pembroke attack well cleared by ‘Keeper Fitzgerald from Paddy Good in the 35th minute. No Penalty Corners to Pembroke and two to Monkstown in 1st Half.

Monkstown pushed back in 3rd Quarter and quickly Pembroke attacked the defence for whom Groves and Ewington were prominent but held firm. Several Monkstown attacks through Brian Groves and Kyle Good broke through but their passes across goal were not finished off. A quicksilver attack in the 44th minute through Gordon Elliott, O’Connor and Good led to Pembroke’s one penalty corner of the game. This was charged down and cleared successfully by Monkstown. There was a melee in the 49th minute in the Monkstown goal mouth following which Paddy Good left the pitch with a shoulder injury.

The 4th Quarter started and in the 55th minute from a Pritchard mistake a quick shot was saved. Shortly after Ewington was green carded and temporarily ‘Town were reduced to 10 men. The game was moving quickly up and down and in the 65th minute from a Pembroke counterattack Paddy Good from play bundled the ball over the line to the satisfaction of both Umpires to give a 2-1 lead to the home team.

Monkstown pressed but Pembroke for whom Colin Kelly in his 17th season of Senior Hockey, Karl Lynch first season with Pembroke and Ronan Flannery were outstanding and held on to claim top spot in Pool B and face the runners up in Pool A.