On what started as a lovely afternoon, the calm before the predicted storm, Pembroke welcomed YM for their first visit to Serpentine Avenue in the IHL. This “top of the table” clash between old rivals held forth a potentially fine game of attacking hockey.

Pembroke tipped off and there was an early thrust by Alan Giles. The game settled down with midfields cancelling each other out. A quick one between Panther and Maurice Elliot left the latter with a one on one with Walker who forced the attacker wide and his shot lobbed out over the side line. There were no corners and only two shots in the 1st Quarter. Unfortunately a protracted, heavy and quite cold shower made conditions unpleasant for the decent sized crowd, players and umpires. 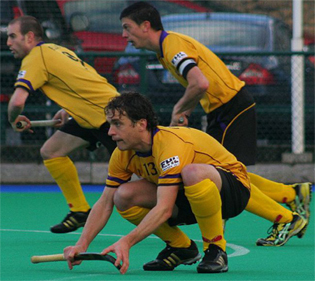 In the 19th minute from YM’s first penalty corner a switch right left Jonny Bruton with a clear shot which found the net. Maybe the defence would not be pleased conceding the opening goal. Immediately afterwards Pembroke equalised, also from their first Penalty Corner when Walker could parry but not stop a drag flick from Jethro Eustace entering his net. 1-1. Shortly later from a Pembroke attack which was cleared YM had a one on one with Jones but the shot from Marcus Richardson was over the bar.

In the 25th minute from a failed Pembroke overhead YM built up a concerted attack down the left. The attacker forced his way into the circle but the ball escaped several defenders going across the circle where Andy Walker was on hand to finish, coolly by hitting into the net from just outside the stroke spot and to his right. Pembroke raised the tempo and Walker was called upon to clear from first an Alan Giles reverse shot and then from Paddy Good from the rebound. Immediately afterwards another Pembroke attack was halted at the edge of the circle and from the clearance YM had a one on one but the shot from Marcus Richardson was over the bar. In the final minute of the Quarter Paddy Good earned a Penalty Corner but this was cleared following a fine save from the ‘keeper and his defenders.

The second half saw Craig Wilson give away a Penalty Corner which was slipped left and blocked only for a further Pembroke mistake and another Penalty Corner awarded again this was switched left but cleared. This was the signal for Pembroke to take the game vigorously to YM and constant attaching prompted by Giles, Eustace Lynch and Conlon set up shots from Elliott, Good and O’Connor. ‘Keeper Walker, Simon Walker and Hewett were under pressure and it was not a surprise when Michael O’Connor was clear of his marker and pushed in a ball in the 42nd minute for the equaliser. Umpire Alistair Shute was by far the busier of the two in this Quarter and incurred the wrath of YM players and Bench on more than one occasion. Several Pembroke corners were saved but the Quarter finished2-2.

Just after the restart a lovely YM move down the right resulted in a pull back but Rob Whelan shot well wide. This was YM’s best chance of the half with both teams looking for their third goal. There were opportunities for both teams although YM’s were mostly on the break. Finally, in the 64th minute Paddy Conlon, ghosting in on the far post, from an attack down Pembroke’s inside right channel, coolly tucked the ball into the net despite the scrambling efforts of Walker; 3-2. In the 66th minute YM had a last chance but neither Jones the Pembroke ‘Keeper or the YM forward could follow the flight of a cross from the left and the ball was forced away. In the 68th Maurice Elliot was unlucky to have been adjudged by Umpire McConkey not to have retreated 5 metres and was given the only Green Card of the match.

A win for the defending Champions against the current Leinster League leaders sees them top of the table ahead of the 3rd Series of matches away to Banbridge on the 4th December.