Pembroke knocked out of EHL by classy Germans

The lads were this evening knocked out of the EHL by a much fancied Rot Weiss Koln side who now go on to meet Barcelona in the Qtr Finals on Sunday. For Pembroke it will be along trek back to Dublin, but they can be proud of the way they played here today, without fear and full of confidence from the off. 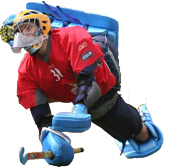 Facing a side fielding 8 German internationals with Beijing Olympic Gold medals in their trophy cabinets was always going to be a tough assignment but Koln never really looked like racing away with the game – their third goal with 2 minutes to go came from was a Christian Zeller penalty stroke following a contraversial sequence of play where Pembroke felt they should have been awarded a corner themselves.

It was the younger Zeller brother who opened the scoring from a short corner breakdown – despite 2 point blank saves Conor Harte was left helpless as P Zeller roofed the ball from a narrow angle.

Harte went on to have a superb game, and was deservedly rewarded Man of the Match by sponsors ABN AMRO.