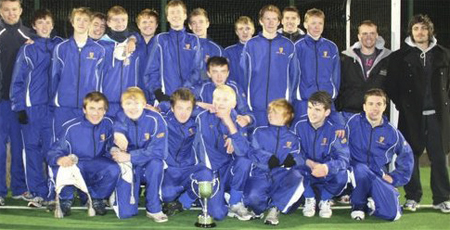 Leinster U16’s with no less than 8 Pembroke players involved, took the Interprovincial title at Newpark last weekend. Captained by David Kane, they remained unbeaten, a 1-0 win over Ulster on Friday with Jack Ryan on the scoresheet secured the title with Ulster only able to respond with a draw in the Sunday fixture.  In the U18’s Kirk Shimmons was part of a Leinster squad who were pipped by Ulster in the final game – the Ulstermen coming back from 2-0 to take the tie 3-2 in dramatic fashion.

Leinster U16’s with the Interprovincial trophy

Further good news for Pembroke when the below players were represented for Irish U16 trials – best of luck lads.

Well done lads, and to all of the players over the weekend who played some fantastic hockey.

On the Ladies side Claire Foley has been picked for Irish U16 trials following the recent Interpro’s in Alexandra College. Well done Claire and best of luck with the trials.